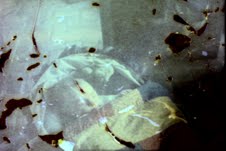 From the tale of Icarus to Plato’s cave analogy and through the fragile materiality of hand processed 35mm film, Fall relates the pain of knowledge acquisition as a girl becomes a woman and one turns into two. 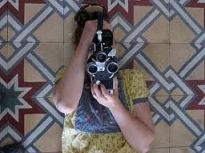 Kathryn Ramey is a filmmaker and anthropologist whose work operates at the intersection of experimental film processes and ethnographic research.  Her award winning and strongly personal films are characterized by manipulation of the celluloid including hand-processing, optical printing, and various direct animation techniques. Her scholarly interest is focused on the social history of the Avant-Garde film community, the anthropology of visual communication and the intersection between avant-garde and ethnographic film and art practices.  She has been the recipient of numerous awards and fellowships including the Social Science Research Council on the Arts fellowship, the LEF New England moving Image Grant and the Pennsylvania Council on the Arts Fellowship.  She has published articles in Visual Anthropology Review and The Independent as well as the anthology Women’s Experimental Cinema and has screened films at multiple film festivals and other venues including the Toronto Film Festival, the TriBeCa film festival, MadCat Women’s Film Festival, 25fps Experimental Film Festival in Zagreb, Croatia and the National Museum of Women in the Arts in Washington DC.

Each Kid on HIp, Camera in Hand program filmmaker was asked to respond to a series of questions about their background, body of work, motherhood, views on media education and how they balance their various roles and duties. The interview for Kathryn Ramey is available here unedited.